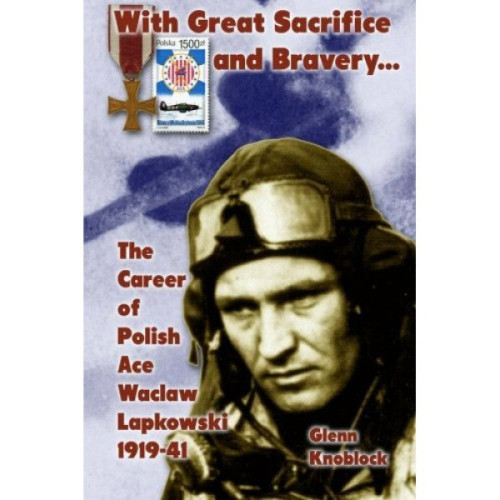 “With Great Sacrifice and Bravery”: The Career of Polish Ace Waclaw Lapkowski 1939-41

While Waclaw Lapkowski was an experienced pilot who became one of Poland's aces during the war, his early demise, like that of so many others, has relegated his achievements to the back pages of history, making them nearly forgotten. It is the author's hope that, in some small way, this work will help preserve the memory of a little known pilot who fought, not only for his own country, but also for France and England during the early, dark days of World War II.

The second reason for producing this work is the unique use of official combat and operations reports from the Royal Air Force (RAF). Many of those who are interested in World War II aviation and fighter aces have read the biographies, and first-hand accounts of air combat contained within, of such men as Douglas Bader, Witold Urbanowicz, Adolph Galland, and Gregory Pappy Boyington, to name just a few. But what of those aces that did not survive to tell their story? How are they to be remembered? In the case of those who served with the RAF, the answer is, in part, through the use of official combat reports and related documents. While these official RAF and Polish Air Force (PAF) records do not sound particularly exciting, a glance at the surviving records quickly proves otherwise. Indeed, the title of this book consists of a borrowed phrase from one such report, and is a small example of the many dramatic events recorded within, often in the pilot's own words. While these reports have been an important source for many works on the RAF and PAF and its achievements during the war, never before, to the author's knowledge, have official combat reports been presented to the reading public in their original form. Though not originally intended for public view, they nonetheless make for exciting and informative reading and will be of interest not only to those with a passing interest in World War II aviation, but to the serious student as well. While the author was unable to obtain combat reports for all of Lapkowski's flights, those that were procured for September 1940 and June 1941 are of particular interest as they highlight all of the kills that he made while serving in the RAF.

What the author found out, from the official combat reports, and various published sources, uniquely combined with available archaeological artifacts, was fascinating. What emerged from the records is a story worth telling. Waclaw Lapkowski, though not famous like such other Polish aces as Stanislaw Skalski, Jan Zumbach, or Urbanowicz, had an interesting and distinguished career. He was in the thick of battle at the outset of the war, when Germany invaded Poland on September 1, 1939, and saw subsequent service during the Battle of France and the Battle of Britain in 1940. He achieved air victories in two out of three of these campaigns, and is one of only a handful of men, less than 150 in number, who served in all three campaigns. To borrow a phrase from the British, Waclaw Lapkowski truly was one of The Few, men whose skill and bravery helped stem the tide of German aggression and made Allied victory possible, at the cost of their own lives.

The German Invasion of Poland, September 1939

The Battle of Britain, August-September 1940

Shot Down over London, September 1940