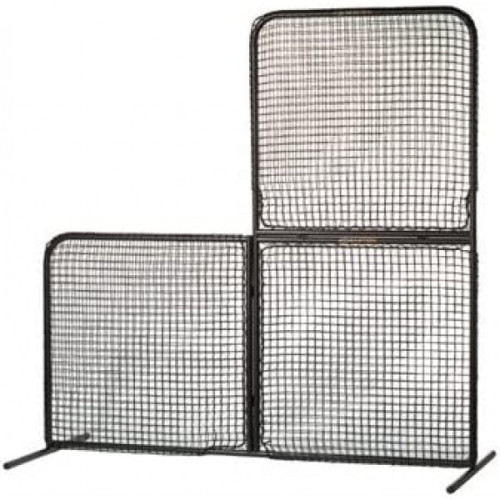 Have a budding baseball star in your midst? Pick up Easton's collapsible L-frame pitching screen, which protects you from line drives and other lasers while you toss batting practice meatballs. Also compatible with portable pitching machines, the screen consists of three durable panels filled with two-sided, weather-treated polyester netting. Simply stand near the opening, toss the pitch, and then step behind the netting once the batter takes a swing. When fully assembled, the unit measures 7 feet tall by 7 feet wide, with the opening configurable for either right- or left-handed pitchers. But when not in use, the patent-pending collapsible screen breaks down in seconds to a mere 41 by 42 by 4 inches. The L-frame pitching screen is backed by a 90-day warranty.

About Easton
In 1922, Doug Easton began crafting custom wood bows and cedar arrows in Watsonville, California. Although Doug produced tournament-grade, footed cedar arrows for the archery champions of that era, he was constantly frustrated with the inconsistency and lack of uniformity of wood shafts. Convinced that consistently straight uniform arrow shafts were impossible to manufacture from wood, Doug turned his attentions to aluminum. In 1939, he began manufacturing aluminum arrows in Los Angeles. His instincts about this material were correct, and in 1941, California archer Larry Hughes won the national championship with a set of Doug's aluminum arrows. This was the beginning of a trend that would change traditional archery and transcend into numerous other sports arenas over the next 50 years. Considered one of the world's preeminent innovators, designers, and manufacturers of sporting equipment, Easton has a reputation of producing products for the highest level of performance.