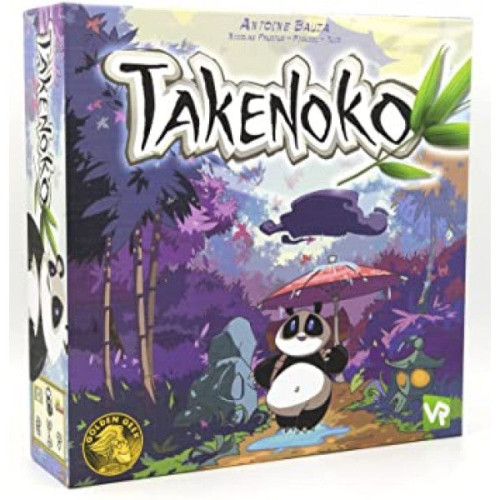 A board game for two to four players by renowned designer Antoine Bauza, Takenoko allows you to work the bamboo plantations and care for the Emperor's panda yourself. Colorful miniatures for the giant panda and the Emperor’s gardener suit the game's light-spirited tone, and these figures will be critical to your designs to grow the most beautiful bamboo stands. Takenoko includes more than four dozen plastic bamboo sections and twenty-eight beautifully illustrated garden plots, which combine to create a uniq

The players take the role of courtesans of the Nippon emperor. They take care of his Giant Panda by growing a bamboo plantation. Their mission: to farm parcels of land, irrigate them, and have green, yellow or pink bamboo grow. In turn, they see what the weather brings and perform two actions from among those offered to them: get a new plot of land or irrigation channel, grow bamboo, feed the panda or draw an objective card. The game ends when a player has completed 7 to 9 objectives (depending on the number of players). The player who gets the best score by adding the total value of their completed objective wins the game.